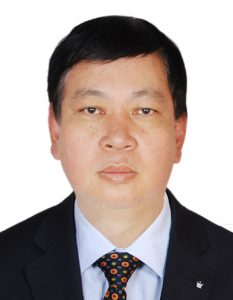 Mr. Moe Kyaw Aung joined the Ministry of Foreign Affairs in 1990 as the rank of Head of Branch-2/ Third Secretary. His previous diplomatic assignments include postings in Washington, Geneva, Jakarta, Bandarseri Begawan. He has also served as Head of Branch – 1 (International Organization and Economic Department), Deputy Director (ASEAN Department), Director (Protocol Department, President’s Office), Director (ASEAN Department) and Deputy Director General (Protocol Department) during his stints at the Headquarters of the Ministry of Foreign Affairs. He served as the Attachment Officer at the ASEAN Secretariat, Jakarta in 2014 and Director (Protocol Department) of the President’s Office from 2009 to 2013.He was the Ambassador/Deputy Head of Mission in Myanmar Embassy in Kuala Lumpur, Malaysia from May 2016 to 11 November 2017. He had the several Delegation, Conference and Workshop experiences .

H.E. Mr. Moe Kyaw Aung took over as Ambassador Extraordinary and Plenipotentiary of Myanmar to India on 23 November, 2017.

Mr. Moe Kyaw Aung is married to Mrs. Nilar Aung who is also the Director at the Ministry of Foreign Affairs, Myanmar and they have two daughters.


To view in Burmese, please
download Zawgyi font
and install.